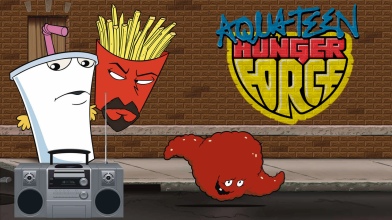 Adult Swim has announced that the upcoming season of the beloved animated series Aqua Teen Hunger Force will be the last. The season, titled Aqua Teen Hunger Force Forever, will premiere on June 21st at Midnight (ET/PT), and will finish the story that has ran for over a decade. Over the course of their long run on television, Master Shake, Meatwad, and Frylock have redefined and electrified the world of animated comedies by exposing the world to their antics in Aqua Teen Hunger Force, and their detective skills in Aqua Unit Patrol Squad 1, along with entertaining the world with shows such as Aqua Something You Know Whatever and the hit series Aqua TV Show Show.