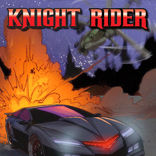 “Lion Forge is absolutely committed to digital publishing and making comics available to everyone, everywhere, no matter what platform or device they prefer, as our motto states: Comics For Everyone,” Lion Forge CEO David Steward said. “It’s so important to have comiXology as a partner in this, not just because of their reach but because they share our passion for making comics fans out of everyone on the planet.”

“I’ve been very impressed with Lion Forge’s output since their debut and am overjoyed that comiXology fans everywhere will be able to share their great titles now that Lion Forge’s entire catalog is available on our platform,” said Chip Mosher, comiXology’s VP of Communications and Marketing.

Since Lion Forge’s debut in 2013, the publisher has added new licensing deals and several homegrown series to its roster, all leading up to an extensive print rollout this year that began with the Miami Vice: Remix comic book series in March. The deal with comiXology closes a gap in its audience outreach efforts that the St. Louis-based publisher has been building for years.

All currently published Lion Forge comics are live today on comiXology’s cloud-based platform, with more set to debut every month in 2015. The assortment includes comics for young readers published by the Roar Comics imprint, and all licensed titles including the upcoming Care Bears and Madballs series published in partnership with American Greetings.

With over 75,000 comics, graphic novels and manga from more than 75 publishers, comiXology offers the widest selection of digital comics in the world. ComiXology’s immense catalog and cinematic Guided View reading experience make it the best digital platform for comic and graphic novel fans worldwide.

Find your favorite comics and graphic novels at comixology.com and try the comiXology app available on all major mobile platforms.