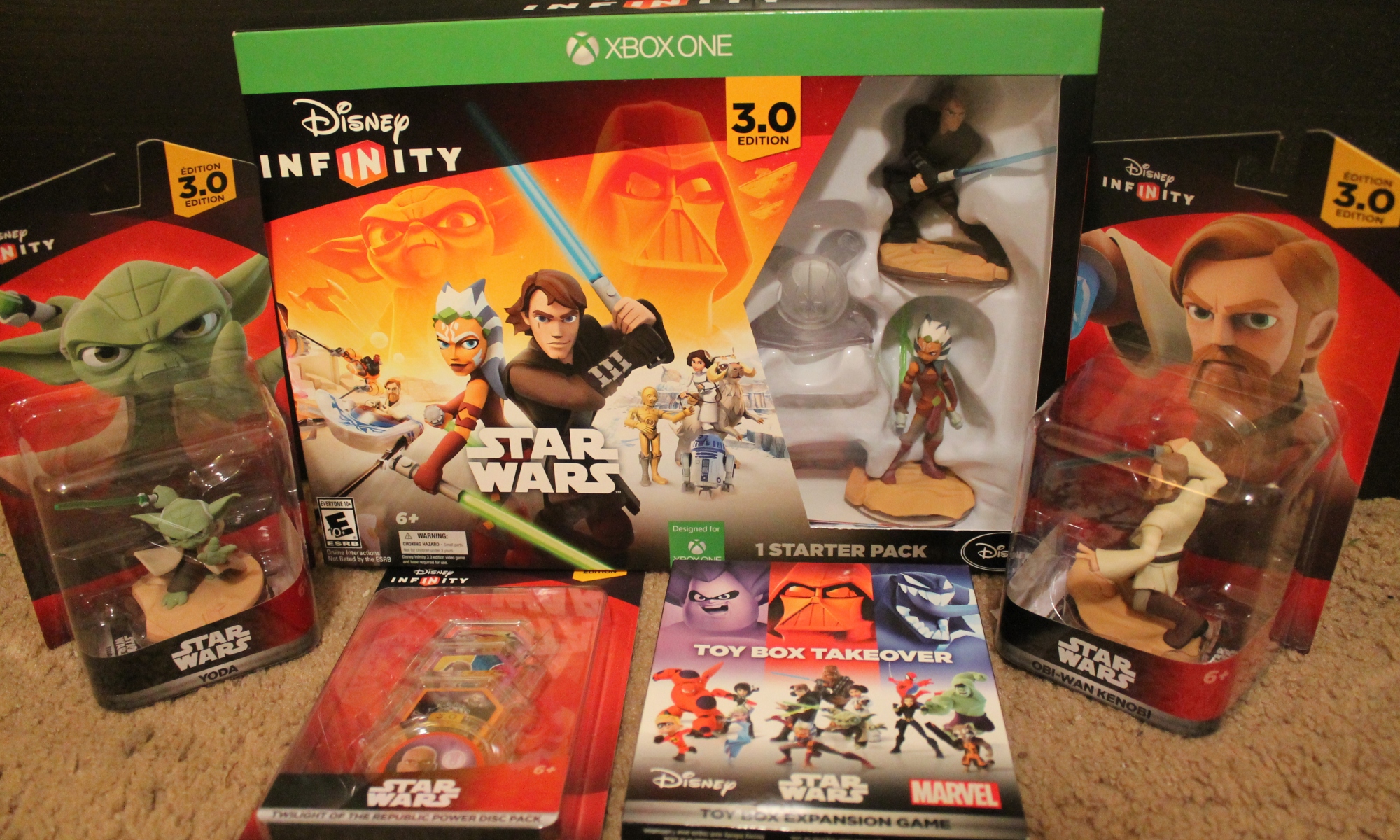 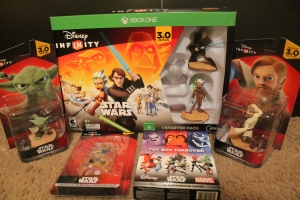 On August 31, Disney Interactive released the highly-anticipated Disney Infinity 3.0. Featuring new content from Star Wars, Pixar, Disney’s classic characters, and more (as well as supporting content from the previous two Disney Infinity games), Disney Infinity 3.0 has more for players to enjoy than ever before in the series! We took a week to test out the game’s various elements, including the Star Wars: Twilight of the Republic play set, the new toy box game Toy Box Takeover, and of course, the Disney Infinity Toy Box Mode itself. Here’s what we thought of each:

Twilight of the Republic

Travel to a galaxy far, far away with the new Star Wars: Twilight of the Republic play set. The set, included in the Disney Infinity 3.0 Starter Pack along with playable characters Anakin Skywalker and Ahsoka Tano, contains levels and worlds based on both the Clone Wars animated series and the “prequel trilogy” of Star Wars films– Episode I, II, and III.

The world design in this set is more diverse than in previous Disney Infinity play sets, allowing players unprecedented freedom to explore four unique planets (Geonosis, Coruscant, Tattooine, and Naboo), as well as the expanses of space. Nonetheless, the set also incorporates level design elements that will be familiar to Disney Infinity players, like chases, collection missions, challenges, and enemy arenas.

Boss fights have changed for the better in Twilight of the Republic as well. Where previous Disney Infinity play sets focused on conflict against one overarching foe, this one brings in a slew of top-tier nemeses, and the actual battles against them are more up-close and personal than in other sets.

This is no doubt related to the game’s updated combat system– game developer Ninja Theory, the team behind DmC: Devil May Cry and Enslaved: Odyssey to the West, collaborated with Disney Infinity makers Avalanche Studios to overhaul some of Disney Infinity’s combat mechanics, giving the game more fluid and nuanced melee attacks for each character.

Whether it’s facing off against some of the most dangerous foes in the galaxy or pod racing across the dunes of Tattooine, your favorite Star Wars and Star Wars: The Clone Wars memories come to life in a brand new way in Disney Infinity 3.0‘s Twilight of the Republic play set!

Back on the Disney/Pixar side of things, there’s the new toy box game Toy Box Takeover! Following in the tradition of toy box games like Disney Infinity 2.0‘s “Guardians of the Galaxy”-themed Escape from the Kyln and “Brave” focused Brave: Forest Siege, Toy Box Takeover is a dungeon crawler that pits your favorite Disney, Pixar, Star Wars, and Marvel heroes against an army of noteworthy villains from various franchises led by the dastardly Syndrome from The Incredibles.

This toy box game is playable as any character in Disney Infinity 3.0, which means you can use all of your favorites from not only the new game, but also the previous two Disney Infinity titles as well! This interchangeability is an awesome feature for Toy Box Takeover, and allows you to create some incredible mashups with your favorite heroes, villains, and sidekicks from the Disney, Pixar, Marvel, and Star Wars universes as these characters band together to save the Toy Box from the forces of evil!

Toy Box Takeover was included with all pre-ordered copies of Disney Infinity 3.0 (and launch week purchases at certain retailers as well.) It retails separately for $20.

If you’ve played either (or both) of the previous Disney Infinity titles, you’re probably familiar with the Toy Box, Disney Infinity‘s creation-based sandbox environment where players can build whatever their imagination desires. Thankfully, the Toy Box has only gotten better in Disney Infinity 3.0, with all previous items still available to unlock and play with (either by placing a previous play set on the base, or by purchasing the items with the in-game currency of sparks.) While all your old favorite items, buildings, set pieces, creativi-toys, packs, tools, and the like are still available, there’s also an impressive roster of new items and features to test out, all of which are introduced in the brand new Toy Box Hub.

The Toy Box Hub, much like the introductory toy box from Disney Infinity 2.0, features a series of hosts, Disney characters who serve as tutorial guides to all of the different features that the Toy Box offers. These hosts are each tailored to a specific type of building and exploration in the Toy Box, and are neatly themed to match their area of expertise– for example, Phil from Hercules teaches you about combat, while Luigi from Cars is your racing guide and Beauty and the Beast‘s Cogsworth shows you how to manage interior-based toy boxes.

The Toy Box Hub also acts as a base for two of Disney Infinity 3.0‘s coolest Toy Box additions– Flynn’s Arcade and the El Capitan Theater. Flynn’s Arcade is where you can find the brand-new online Toy Box matchmaking system. By interacting with an arcade cabinet at Flynn’s, you can instantly be matched with up to three other players in competitive online Toy Box games! Meanwhile, at the El Capitan Theater, you can check out the latest featured community content– download some cool user-created toy boxes, upload your favorites that you’ve built yourself, and watch the latest episodes of Toy Box TV in-game!

With tons of content to explore in play sets, toy box expansion games, and the Toy Box itself, Disney Infinity is a game with nearly endless hours of exciting gameplay and fun– check it out now wherever toys and video games are sold!