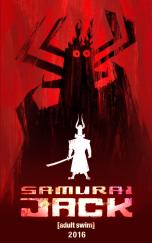 Adult Swim announced that they will be continuing the hit animated series Samurai Jack. The show originally aired on Cartoon Network, and has been off the air for over 10 years. It will be making it’s return next year on Adult Swim’s Toonami block, with the support of the original creator and executive producer, Genndy Tartakovsky. You can view a teaser trailer for the show below. For more on Samurai Jack and all things Adult Swim, keep it here on NYCityGuys!