From Adult Swim & Games alongside Super Awesome Hyper Dimensional Mega Team, gamers will be treated to one of the most beautifully-animated and well-rounded sidescrollers in recent memory with Rise & Shine.

This title took me by surprise, from the great visuals to the well developed comic book-esque story sequences, I found myself fully immersed & interested in this video game hybrid world that Rise and Shine presents players with.

One thing that makes Rise & Shine a truly unique experience is its art style. When traveling through the varied areas within the game, I felt as if I was running within a Saturday morning cartoon, as every detail I noticed felt as if it popped from the screen. Throughout my time with Rise & Shine, the game also ran at an impressive framerate which complimented the already breathtaking visuals. I haven’t had this enjoyable of an experience with a sidescroller’s visuals since 2011’s Rayman Origins.

Rise & Shine is also chock-full of gaming references, such as Rise’s father having a striking resemblance to Marcus Fenix from the Gears of War series, or the king being similar to Nintendo’s iconic Super Mario. With quick cameos from parodied versions of characters like the Duck Hunt dog, the game has an almost Wreck-It-Ralph feel if Wreck-It-Ralph took place during a video game apocalypse. With mushroom heads hanging from the ceiling along with the townspeople, Rise & Shine gives players the chance to experience a war-torn world including characters similar to some of the most iconic & recognizable faces within the gaming industry.

the campaign. Ranging from an electricity ability to being able to turn your endless amount of bullets into explosive rounds, Rise & Shine makes you feel like a one-man army. Also, there are not many shooters out on the market right now where the gun, known as Shine in the game, can talk. Offering memorable one-liners during the campaign, Rise & Shine’s dynamic adds to the already enjoyable experience. 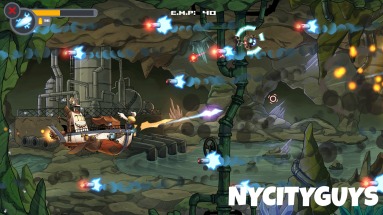 Overall, Rise & Shine is a breath of fresh air for fans of sidescrollers. While the game did not take too long to complete, it was a memorable experience and sets the bar high for 2017. Bringing unique visuals, great gameplay and a new kind of story to the table, Adult Swim Games and Super Awesome Hyper Dimensional Mega Team have outdone themselves with Rise & Shine. This is definitely a game worth checking out & playing from start to finish. For more reviews, along with all your entertainment news, keep it here on NYCityGuys!