The newest summer blockbuster Ant-Man may be Marvel’s best superhero film yet. From the second it begins all the way until after the credits roll, Ant-Man is truly a spectacular movie. Paul Rudd shines as Scott Lang, an ex-convict who has trouble finding work after being released from prison. He wants to be able to provide for his family, and is given the chance to turn his life around when Pym Technologies founder Hank Pym (a perfectly cast Michael Douglas) presents him with the opportunity to become Ant-Man.

Ant-Man has a perfect blend between humor and intense action sequences, similar to the first Iron Man movie and last year’s smash hit Guardians of the Galaxy. The action scenes do a fantastic job of showing the scale in which Ant-Man fights, by having items like a Thomas the Tank Engine toy train play a major part in battles. The 3D in Ant-Man is breathtaking, and adds extra pop to the already impressive visuals. Another great part of Ant-Man has to be the supporting cast, including an outstanding performance from Michael Peña as Luis, one of Scott’s closest friends and also former criminal companion, who delivers hilarious one-liners throughout the film. 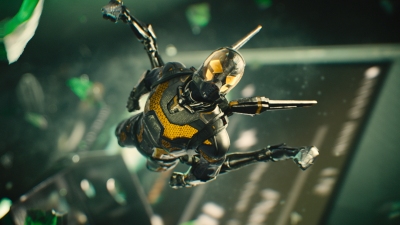 Overall, Ant-Man is the most thrilling and well-written action movie in years. It has amazing visuals, witty dialogue, incredible performances from the entire cast, and intense battles. The movie is entertaining throughout and the stakes are set high as Ant-Man fights the devious Yellowjacket to keep Pym’s secrets safe, protect his family, and save the world from destruction. Marvel has once again delivered an amazing, thrilling, and unique superhero film to fans of all ages!

Ant-Man releases today, July 17th, in cinemas worldwide. For all of your Marvel movie reviews, keep it here on NYCityGuys!