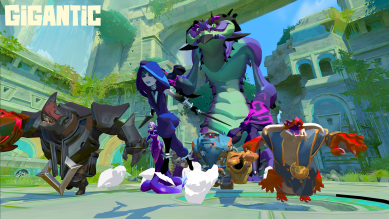 Perfect World Entertainment Inc. alongside Motiga Inc. have released Gigantic across the Xbox One, Steam, Windows 10, and Arc platforms. The free-to-play hero shooter launches with all new content added to the game, introducing  text chat, new packs and a blade-wielding hero. The 19th hero in the game’s roster, Ramsay, will be available alongside the official launch today.

Players can now dive into the full Gigantic experience and see what this visually impressive shooter has to offer. With a wide variety of heroes to choose from, all included in the Ultimate Pack, fans will have an awesome time testing out all of the different heroes & abilities found in the game. Following the game’s launch today, it has also been announced that gamers can unlock exclusive items after logging into the game. You can check out the breakdown below:

If you want to find out more about Gigantic, you can head over to the official “Go Gigantic” website here! For our review of Gigantic along with all your entertainment news & reviews, keep it here on NYCityGuys!