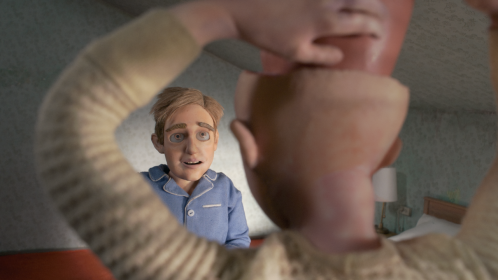 Adult Swim’s newest stop-motion animation series is nothing short of nightmare fuel set to keep viewers on the edge of their seat. Created by Vernon Chatman, The Shivering Truth is a new anthology series that push the boundaries of reality and create something unique and horrifying. In the show’s first episode, “The Nurple Rainbow,” we are shown a handful of different stories all within a quarter-hour time slot. Ranging anywhere from grotesque creatures found inside the heads of cubicle workers to a family driving themselves to the point of insanity from a single game of peek-a-boo with their daughter, there’s a lot to take in during this pilot. The Shivering Truth works to create memorable stories within a confined amount of time, and does an outstanding job of presenting audiences with a wide variety of nightmarish scenes. 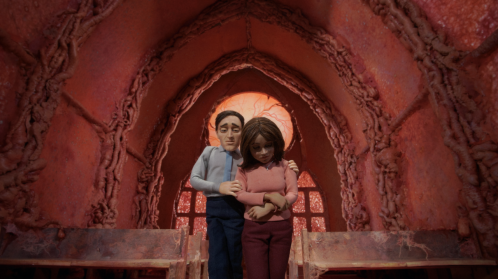 “The Magmafying Past,” the second episode in the series, takes viewers through an even bigger whirlwind than the first quarter-hour block. As we witness three narratives intertwine in a darkly humorous way, audiences will witness the forming of a church from the arm of a young boy, a mental connection between a soldier and a general, and a woman shopping for underwear with minds of their own. The three stories connect through the concept of love, and come together in a way only this show could accomplish. Masterfully written, the second episode truly hooked me and has me looking forward to what the series is capable of.

In the current lineup of programs on Adult Swim, The Shivering Truth is an absolute stand-out. It’s refreshing whenever a show such as this comes along that decides to push the boundaries and scare audiences a little bit. The show’s format keeps the pace moving by fast, and before you know it the entire episode has passed by. In recent memory, there hasn’t been a pilot that gripped me quite like this did. For fans of Adult Swim’s more out-there offerings such as Mr. Pickles or The Heart, She Holler, this is definitely a show worth checking out.

Overall, The Shivering Truth is a great new offering from Adult Swim, and bizarre enough to be worth checking out. The series premieres on Sunday, December 9th at Midnight (ET/PT) on Adult Swim. For more Adult Swim news and reviews, keep it here on NYCityGuys!