The second season of Hulu’s original series Future Man is available for streaming now. The sci-fi /comedy adventure picks up where Season 1 left off in the year 2162. In this alternate timeline, Josh, Wolf and Tiger now find themselves facing the repercussions of their own time traveling. We had the chance to discuss the new season with a few members from the cast & crew, including executive producer/director Evan Goldberg and executive producer/showrunner Ben Karlin, along with stars Josh Hutcherson, Eliza Coupe, and Derek Wilson.

When asked about if the show would dive headfirst into the concept of time-travel, executive producer Ben Karlin explained the direction that the show will take fans in. Future Man Season 2, Karlin explained,  follows the question “What happens if you’re stuck in the future that you created and deal with the consequences of that? That’s the story we wanted to tell this year.” 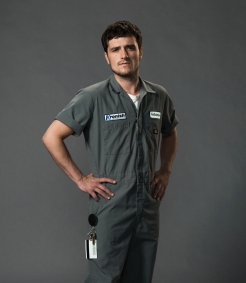 In regard to the creation of Future Man‘s second season, I asked Evan Goldberg what the biggest difference was between working on a film and developing a television series for a streaming service. “It’s like a completely different thing. It’s like, so different I was shocked. When we first did Preacher, it was like going to school…I’ve never run a writer’s room. It’s like a whole thing where, like, every writer is like a piece of your own mind and they’re all working as a team and each writer has their strengths and weaknesses.” He compared working in a television writers room to being a conductor, whereas working in movies just boils down to a few people working collectively in a room typing.

Future Man star Josh Hutcherson also had some words to share about working in television as opposed to film. “It’s hugely different. One of the biggest differences is you have a lot more time to explore characters and build worlds,” the actor explained, “You’re not beholden to 90 minutes or 120 minutes, so you get a lot more time in those worlds, and that’s really great as an actor. One of the bigger challenges is, for me, switching directors. It’s a crazy thing: in 13 episodes we have like six different directors. For me coming from film, I’m used to the director being the person that has a singular vision. Here we have the showrunners and creators that we lean on for things like that, and so that’s more of a tricky dynamic.” When asked about the show’s unique futuristic setting and its factions, Hutcherson responded, “Future Man Season 2 is very much rooted in 2162 Los Angeles. We have this dystopic society where it’s fractured into two sects: the Mons (which are the “haves”) and the Nags (which are the “have nots”). And I’m stuck in the Nags with Wolf and Tiger is moreso in the Mons. So there’s this… rift between our factions– the structure of this season is trying to come together and trying to save the world”. Hutcherson plays the leading role of Josh Futturman on the Hulu series, and is also one of the show’s producers.

Another season of the science fiction hit also calls for deeper character development. Eliza Coupe and Derek Wilson discussed how they connect with the characters they portray. Coupe discussed how her character has changed from the first version of the script she read, originally being much more sarcastic and dead-panned, to now feeling like something much more special in the final version of the show. The actress explained, “I don’t like characters that don’t have a warmth or a depth to them…There needs to be that because otherwise you can’t connect, and then why would you care about that person. Because I watch things and I see actors and I’m like, ‘I don’t care about this character even though I’m supposed to.’ I want to know what’s underneath.”

As for the character of Wolf, actor Derek Wilson discussed how fans will see a newer side of him this season. “I think of him still as this hardened warrior, and he’s not really that anymore. He has that, but he’s got that softer side. And in this season, too, he finds love in new ways… and he gets even more soft, in a way.” Wilson described the filming process for the show as filming, “pretty much a movie on a TV schedule”. The series, which includes a ton of special effects and high-energy sequences, is film quality in nature, but distributed in a television style format.

Executive producer Ariel Shaffir discussed how all these characters come together and interact in Season 2, and how their personality traits play off each other. “They’re all pretty selfish in a way,” Shaffir explained, “but then ultimately they overcome their selfishness and realize that they belong together and should be good to each other.” In Season 2, Shaffir tackled the way in which these heroes try to save the world as they know it. The executive producer described, “That’s something that we tried to explore in the second season– even though they’re trying to save the world and that seems like an altruistic thing to do, we explore whether or not they’re doing that for selfish reasons or whether you’re actually doing that to help others”.

Future Man Season 2 is available now via Hulu, and you can check it out here. You can check out the trailer for the second season here. For all your entertainment news and reviews, keep it here on NYCityGuys!