Recently, I had the opportunity to visit the set of CBS’ newest sitcom Kevin Can Wait! After being taken from CBS’ Manhattan studio on a bus to Long Island, we quickly made our way into the sound stage where the Andy Fickman-directed comedy is filmed. The show takes place in Long Island, where Kevin James plays a newly retired cop trying to celebrate his time off, now that he is relieved of his duty on the force.

During our time on set, we had the chance to speak with actors Kevin James & Erinn Hayes, along with director
Andy Fickman about the show! When asked where they drew inspiration from on Kevin Can Wait, here’s what Andy, Kevin & Erinn had to say!

Kevin James: We draw a lot from real life. I have Danny, over there, my buddy, who is one of the cops we based the show on. He’s a retired police officer, and he lives in Hauppauge. He’s got two daughters. He’s got daughters that are 16 and 14, and they’re in that range. You just play it like you would normally play it. There are writers on the staff that have daughters and kids that are that age, and some are older and have been through it so they know. Yea, I mean, it’s how you would normally play it. 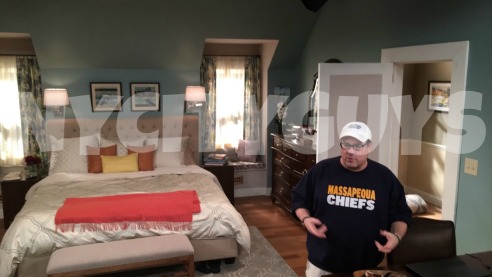 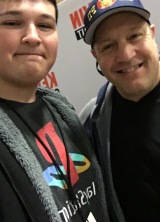 Erinn Hayes: I feel like, to me, parenting is weird, though, because you know, you only ever, when I hang out with kids who are older than my kids I’m like, “What do you do? What can you do? I only know 7 and 9! Next year I’ll know ten. This year I don’t know ten! Can you drink soda? Do you get screen time? My kids do not.” That’s where it’s like, you’ve just got to trust the writers that they’re doing their research in terms of what those kids are going through and then whatever comes to the page — it’s still parenting, it’s still trying to guide your kids in the right direction with comical situations.

Kevin James: ….what she said [laughs]

Andy Fickman: By the way, also, our kids on the set are those ages, and they’re very quick to comment about something they would or wouldn’t say to try to make it feel like it’s real for them in their language.

Upon talking with director Andy Fickman, he told me how previous
to Kevin Can Wait, the sound stage used for the taping had never been used for a sitcom. So, it was the first time that these kind of cameras were used in the location. Also, most of the crew working on the show did not have experience with the multi-cam format used on many popular sitcoms. However, Fickman told us that the team learned quickly, and that he couldn’t be happier with the people he has the opportunity to work alongside.

It was quite an experience getting to hear from the director about how the show is filmed, and the techniques used to make sure everything operates perfectly throughout the taping of the program. It’s interesting to see how such life can be brought to the show through the use of clever camera angles, a great team, and awesome director, and an extremely talented cast of actors. Make sure to tune into Kevin Can Wait on Mondays at 8PM ET on CBS! For all your entertainment news & reviews, keep it here on NYCityGuys!